After some high-profile publicity just listed at the end of 2010, the joint truck has been quiet for a long time, and the production and sales have not been satisfactory. Two years later, the senior truck of the joint truck appeared again in front of the media, unraveling the mystery of the quietness of the joint truck.

When talking about why the joint truck will be "halo" for two years, Liu Bo did not say that "unification of the truck was bad luck. Once it was born, it encountered a downturn in the heavy truck market." 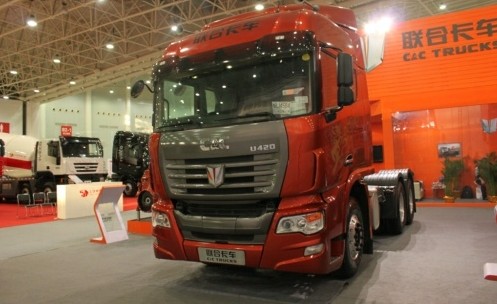 But on the other hand, Liu believes that when the heavy-duty truck market is booming, customers will choose to buy mature brand heavy trucks in order to seize the market; in turn, the market downturn will make room for the development of the new military enterprises. "When users buy a car, they will think twice. This gives us room to continue to expand our market."

According to briefings, although "unfortunate times have not been achieved," the joint truck has not been devalued for two years but has been working hard.

â€œWe practice internal strength. One of the most important is to modify standards such as design standards, process standards, network development standards, and even the standards of each screw. Previously designed molds did not conform to the current new standards and must be redeveloped. It takes a long period to re-develop new molds. This is one of the key tasks we have done in the past two years,â€ Liu Bo explained.

Through the revision of the standard, the joint truck has been given the "new concept of heavy truck, new industry standards" position. The so-called "new concept heavy truck" is simply the future high-end heavy truck in China. â€œWe strive to build heavy trucks that are consistent with the world's standard for high-end heavy trucks that are recognized by the future heavy truck market in China and recognized by our customers.â€ Liu Bo further explained that the starting point for the creation of the â€œnew concept heavy truckâ€ has two main points: First, the future society. The requirement is that the vehicle should be safe, environmentally friendly and energy-efficient; secondly, the requirements of future users should be more efficient, more economical, safer, and more reliable.

Liu Bo told reporters that since Europe has been at the forefront of the world in terms of heavy truck industry standards, joint trucks have drawn European standards in every respect. â€œThe service standard for combined trucks is implemented in full compliance with European standards. Since many current domestic heavy truck users do not use vehicles in accordance with industry regulations and standards, the damage to vehicles is very serious. Therefore, the combined trucks strengthen their customers in accordance with European service standards. The training provides customers with a complete training program and after-sales maintenance program to ensure the normal use of vehicles. In addition, the joint truck has also created a professional maintenance team to implement on-site service to some large customers.

The transformation of the network is also one of the key tasks for the joint truck in 2013.

Regarding distribution network distribution, Liu Bo, who has been operating in the heavy truck industry for many years, deeply feels that many automobile manufacturers have too many sales networks and there may be multiple distributors in the same place. Although this can seize the market, it also creates a competitive relationship between distributors, especially the current market downturn, vicious competition is particularly fierce, there has been a "dealers selling cars do not make money, and even down the money" situation.

In order to solve this "illness", Liu Bo said that the joint truck hopes to embark on a completely different road from other manufacturers, learn from the experience of foreign brands, and implement an "agent system." The so-called "agent system" is to carry out brand agency, product agency, business agency and service agency in a specific area, and it is only in one particular area. Its difference from the "distribution system" is that dealers will use the competition methods and methods that are not permitted by the main engine plant for the sake of maximizing profits, and "agents will not conduct vicious competition."

â€œThe standard of the joint truck selection agency is that those who are willing to join forces with the joint trucks to jointly promote the development of the entire platform. Joint trucks will establish good standards and rules, provide support and services.â€ Liu Bo said, â€œWe will also learn some good practices from domestic and foreign counterparts, including good experience in non-truck companies.â€

At the same time, "As joint trucks take the high-end route, our customers are also high-end customers. Therefore, we will only build relatively popular 4S stores in some benchmark areas so that we can save the money (a large-scale construction of 4S shop money). Save and provide better service to users."

Liu Bo told reporters that at present, United Trucks already has nearly 100 agents, and it will grow from 150 to 200 in the future. "This is also the ultimate goal of the future."

â€œWe will promote a differentiated strategy for a centralized strategy and provide the market with various subdivided products,â€ said Liu Bo.

The so-called "differentiation strategy", he explained, is to focus on those segments that are more in line with the company's philosophy. Therefore, the joint truck will still insist on the high-end market locked in at the beginning of the product launch.

As for the "centralization strategy", "we will focus on some sub-sectors, target them, and focus on breakthroughs." In the case of alternative energy trucks, for example, the joint trucks have determined that the hot market for natural gas heavy trucks will continue. Therefore, the combined trucks have adopted a centralized strategy for this market. "Through the past two years, the joint trucks have performed well in the LNG heavy truck market and sold more than 1,000 vehicles this year," said Liu Bo. In addition, the port logistics, hazardous chemicals, and truck mixer markets are also part of the strategy for the centralization of trucks. "Couple truck air suspension products are very suitable for these market segments. We will focus on breakthroughs in these markets."

â€œJoint trucks pursue quality and differentiation, provide specific products to some market segments, and lead the development of Chinaâ€™s heavy truck market to high-end development.â€ Liu Bo said, â€œThis is also the purpose of our continued practice of internal strength and deepening our brand.â€